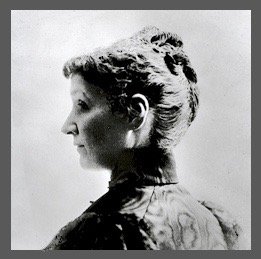 Mary Hallock Foote was a very accomplished illustrator and writer of the late 1800’s and early 1900’s. She received excellent training at the Cooper Union School of Design in New York City, becoming a sought-after book illustrator for top authors of her time. Her clients included Longfellow, Hawthorne, Tennyson, Alcott, Whittier, and many others. At that time, illustrations in books and magazines were predominantly done by engraving. (See brief description of engraving, below)

Mary’s first published work was in 1867, under her maiden name Mary Hallock. She had published quite a bit of work by the time she married Arthur De Wint Foote in 1876. Arthur was a civil/mining engineer. He had obtained a position at the New Almaden Mine in California at the time he and Mary got married. Thus in 1876, Mary left New York and followed her husband to California. That was the beginning of an unusual lifetime, moving between mining towns and other parts of the West, encountering places, people, and experiences that she would never have seen if she had stayed on the East Coast.

Please enjoy slideshows of some of her published art.

Examples of illustrations
for major authors

In addition to illustrating books, Mary also provided illustrations for major Eastern magazines. Her pictures of life in the West were very interesting to her Eastern audience. Her editor encouraged her to write stories to go along with them. That led to a successful career as a writer of twelve published novels and many short stories for both adults and children.

Mary Hallock Foote is recognized as an important historical figure for providing realistic portrayals of life in the Far West with both her writing and her artwork.

Examples of pictures
from the Far West

Comments about the slideshows:

Wood engraving is a relief printing process. An end-cut of a hardwood, such as boxwood, is polished to be very smooth. The end-grain is harder than a a wood plank and doesn’t tend to “lead” the cutting tools with its grain.

The image is drawn on the smooth block by the artist. Then an engraver cuts away all of the parts that are to be white background, leaving just the drawing itself still raised. Thus when the surface of the finished wood block is inked and then pressed against paper, only the part that was drawn will be transferred to the paper. 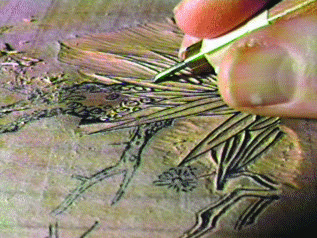 On the left, you can see a picture was drawn on the wood and the background area is being cut away. It is obvious what the “print” will look like.

In advanced engraving, as you see in Mary Hallock Foote’s work, there is more than lines and white-space. Mary was trained by a master engraver to design and produce her drawings in a way that was conducive to high quality engravings. The quality of her artwork on the wood blocks was good enough to attract expert engravers to work with her.

Changes to wood engraving led to using an engraver’s burin (graver) rather than knives. Different shapes and sizes of tips allowed engravers to do much more intricate work. As you look at these slideshows you will see a much higher level of detail than black lines on a white background.  Pairing an expert illustrator with an expert engraver produced these wonderful pictures. During that period, engravers sometimes received credit along with the artist. The artist, however, interpreted the story in ways that pleased the authors.