A. D. Foote was noted for his horticultural skills. It is a well known fact that he designed the North Star House woodland landscaping that surrounds the house.

In the winter, the North Star, the Little Dipper constellation and the Sutter Buttes are in view from the veranda / terrace. The Little Dipper is laid out with bronze stars on the terrace floor. It is told that Julia Morgan did the measurements.

The north side of the house contained many of Foote’s plantings. A tulip tree (Liriodendron tulipifea) was planted close to the house in an area that contained plantings of deutzias, azaleas, pyracantha, and peonies in amongst the Ponderosa pines. A tall Eastern American tree in the Magnolia family, the tulip tree grows profusely in the Hudson River valley, Mary’s childhood home. It can be viewed from Mary’s study and the dining room windows. A climbing rose of unknown variety bordered the study window. There were many footpaths lined with mine rock and different grasses. We have a photo of a rubber plant, another exotic touch, planted on one of these paths. 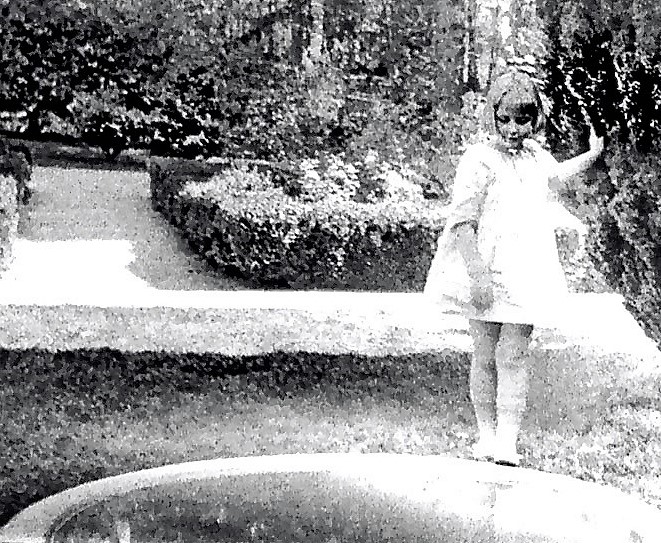 In the patio area, Julia Morgan designed both the pergola supported by two mine rock columns and the reflecting pool. Foote planted a grass lawn around the pool and added two yew trees planted “side by side”. Two ceramic jars were placed “side by side” to the right of the pool near the corner of the house. The first rose to be planted on the pergola was an 1853 French climber, Gloire de Dijon, creamy buff colored, double blossom rose. Mary reports that Betty used these roses in her 1907 wedding. This rose suffers from die back and mildew and by the 1920s was replaced with Banksia lutea. These yellow flowered rose bushes grew profusely to cover the pergola and the surrounded upper story balconies. The rose garden enclosed by a boxwood hedge that ended at the corners of the house was created over a period of time. It was quite developed by the time that Foote retired in 1913 and his grand children reported that he often sat on a high stool pruning his roses. A big flower bed and more roses extended beyond the hedge. Only a few roses were found in 2003; Baronne Provost, American Beauty and Dainty Bess and two root stock roses, Manetti and Dr. Huey. 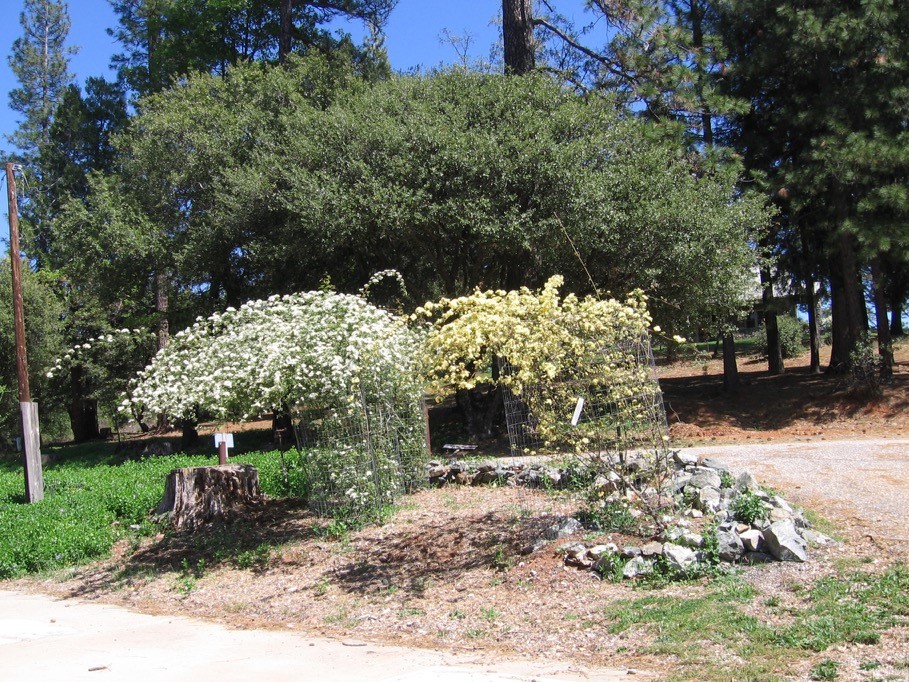 This formal rose garden ended at the edge of the house where an exuberant flower garden flourished in woodland style. There was a path that lead down to the vegetable garden. Another path lead to the raspberry-blackberry area that is now the site of the North Star Heritage Garden. The family reports that Luther Burbank white blackberries were a family favorite. Burbank’s thornless blackberries are still found in the area. A row of AD Foote’s hybrid hollies separated the two gardens. One holly remains today along with some hollies that the school planted.

The path from the patio to the orchard meandered through natural woodland of ponderosa pines, black oak, live oak trees and manzanita shrubs. Ferns were planted under the windows on this side of the house.

The Hague House can be seen up on the hill from the patio area. This 1911 house, designed by Robert Swain Peabody of Boston was built for Billie Hague, son of James Hague and nephew of AD Foote.  Billy became the North Star Mine manager in 1908 after his father died.

A rambling Cherokee rose and trumpet vines are on the kitchen side. Rhododendrons, Lee’s purple and  a blue “ augustinii, are on the Master bedroom side. All that is left of the rose garden is part of the boxwood hedge.  A honey locust tree was planted outside of the dining room double doors. Several weeping type birch trees, are near the swimming pool, All are still surviving except the roses.