Billy was educated at Harvard, class of 1904. He worked for the Copper Queen Consolidated Mining Company in Arizona as a surveyor and geologist. He was instrumental in the construction of the Copper Queen smelting plant. He traveled the US and Mexico extensively to broaden his mining experience.

When James Hague died in 1908, George B. Agnew replaced James as President and 31-year-old Billy Hague became Managing Director of the North Star Mine. Billy was still involved with the Copper Queen operations and was only in Grass Valley part-time. In 1910, the Board of the North Star Mine Company felt that one of the directors should give personal attention to the Company’s affairs at Grass Valley. So in 1910, Billy Hague built a home on the hill above the North Star House and moved in with his wife, Elizabeth. They had two sons: James Duncan Hague, b. 1911 and Nathaniel, b. 1914. James was named after his grandfather. Nathaniel died at the age of 2.

James Hague was the brother-in-law of North Star Superintendent Arthur D. Foote, since James had married Foote’s sister Mary Foote. So when Billy became manager of the mine, his uncle, AD Foote, was the superintendent. When AD retired in 1913, his son, Arthur B. Foote (Sonny) assumed the position. This was truly a mining family! Cousins Billy and Sonny continued to run the mine that their fathers had run.

As mine manager, Billy developed time studies of the various mining operations to determine their relative importance. He also set up an accounting system to determine the cost of each operation, from drilling the rock underground until it passed out of the mill. His analytical approach and meticulous records helped them improve their operations. For example, he found out that the drilling was one-third the cost of delivering the ore to the mill. That motivated one of the engineers, William Paynter, to develop a machine for testing drills. The machine was patented and used by drill manufacturers to improve the efficiency of their products.

Billy obtained funding and directed the move of mining operations from the original Auburn Road location (where the North Star House is) to the Central shaft on Allison Ranch Road. A new steel head was erected in 1915. A 60 stamp mill was running by 1917. The only equipment left at the old site was the Cornish pump. The original Assay House became a rental house.

Billy had a strong sense of patriotism and was very disturbed by the the rise of German aggression in Europe. After the outbreak of World War I, Billy was one of many miners and mining engineers from the Grass Valley area who enlisted in the military and went to France to help with the war effort. He contracted influenza and died in a Red Cross hospital in France in January, 1918. 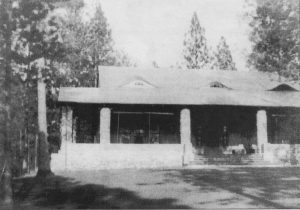 The house that Billy built is known as the Hague House. In 1910, a Boston architect, Mr. Robert Swain Peabody, was commissioned to build an Arts & Crafts style house for Billy. He moved in with his wife Elizabeth.

After Billy’s death, Elizabeth continued to live there with her son, James, until James left for boarding school.  Elizabeth moved at about the same time.

The North Star Mine and the Empire Mine were purchased by Newmont Mining Company in 1929, thus the Hague House was owned by Newmont. The house was used for different purposes. Newmont sometimes used the house for employees and it was rented several times. In 1945, AB Foote’s daughter, Janet, was widowed and returned to Grass Valley with her children. They lived in the Hague House for a few years.

The North Star Mine was shut down in 1956, when all of the gold mines were shutting down for economic reasons. In 1957, Newmont created a research station on the North Star 700 acres and the Hague House was used as a research facility for Boyce Thompson Institute for Plant Research.

After the Institute finished its work, the Hague House was used as a rental. It was vacant and falling into disrepair in 2002.