Architect of the North Star House 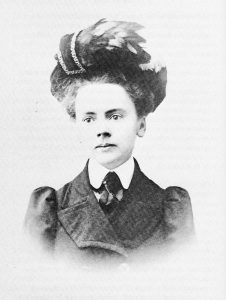 Julia Morgan was born in San Francisco, CA in 1872. She spent her life living in the San Francisco Bay Area except for a childhood year in New York and her time in Paris. She had a strong affinity for the Bay Area. She never married or had children. She was totally focused on and passionate about her work.

Julia Morgan received her Civil Engineering degree from UC Berkeley in 1894 and was the first woman to be admitted to the Ecole des Beaux-Arts in Paris, the finest architectural school in Europe. It took her three years to be admitted to the school due in part to their reluctance to have female students. She became the first licensed female architect in California in 1904. In her career, Julia designed and built over 700 buildings, including private homes, schools, churches, YWCAs and much more, plus major building complexes such as Hearst Castle and Asilomar Conference Grounds.  That is an astounding output, especially considering each project was unique and she gave personal attention to the design and construction of each one.

After working for architect John Galen Howard on construction of the UC Berkeley campus, Morgan decided she wanted to work for herself. She opened her own office in San Francisco in 1905. She set very high standards for herself and for all of her staff. She mentored them and encouraged ongoing learning and growth. She also cared about them as individuals, paid well, and carried some through hard times. One of her employees, Walter Steilberg, who was reluctant to work for a woman, later wrote “Not only was she one of the most talented of West Coast architects, she was also far more accomplished in the area of building technology than any of the men I have known.”

In a man’s profession, Morgan’s talent and professionalism eventually won over both fellow architects and potential clients — and many of them became lifelong friends.

Her architectural work had a strong engineering foundation. For example, she was a pioneer in the use of reinforced concrete and created her own cement formula. Structures that she built prior to the 1906 San Francisco earthquake survived the earthquake while other buildings suffered severe damage or destruction. That gave her career a major boost. She was very advanced in using thick concrete plaster and metal lath on both sides of the interior walls — a technique which made the walls hard and durable. Her custom reinforcing inside the walls of the house is apparent as we restore the North Star House.

When Morgan was hired to design the North Star House, she did it in Arts & Crafts Style. Much of the materials she used were from the property, including cedar, fir and redwood. Rock from the mines was used for walls and pillars. She situated the house on a knoll, with a lovely view towards the sunset and out over the valley. Having gotten her architectural license in 1904, this house was one of her first commissions.

Many architects talk to clients and then design what they think their clients should want. Morgan listened to her clients and designed what the clients wanted.  She did not impose her personal aesthetic on anyone. That is apparent in the wide range of styles she produced: Arts & Crafts, Mediterranean, Spanish, Bavarian, Mission, etc.

Morgan also had excellent design taste and attention to detail with the interior and exterior decoration of her buildings. She had a good relationship with many skilled artisans who worked in wood, metal, clay, and other mediums. She provided detailed drawings of stairways, trim, railings, and all manner of adornments for them to make.

Biographers have complained about how difficult it is to learn about Morgan because the only part of herself she really showed to the world was her completed buildings. As Sara Holmes Boutelle, Morgan’s biographer, put it, “She steadfastly refused to enter competitions, write articles, submit photographs to architectural magazines, or serve on committees, dismissing such activities as fit only for ‘talking architects.’ Julia Morgan felt that you can’t properly learn about a building from pictures or writing — you have to be there and experience it.”

“My buildings will be my legacy … they will speak for me long after I am gone.”
–  Julia Morgan

Click here to view a wonderful 7-1/2 minute video of Julia Morgan and her work.
This video was created to support the effort to have Miss Morgan awarded the annual Gold Medal from AIA (American Institute of Architects) in 2014 (awarded posthumously).