Arthur De Wint Foote and Mary Hallock Foote moved into the North Star House when it was built in 1905.  Arthur was the superintendent of the North Star Mine and the house became a family home for three generations of the Foote Family.  You can read more details about Arthur D. and Mary on their individual pages. 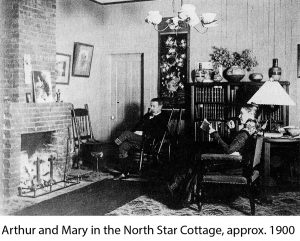 In 1876, Arthur and Mary were married.  Both were born in the East and met each other in New York. Arthur (age 25) had done several engineering projects in the West and had secured a position at the New Almaden Mine in California. Mary (age 27) was living in New York and was a book illustrator for major writers.

Thus began their lives together, moving from place to place in the West with many visits to the East coast. There were several times in the first eight years of their marriage that Arthur would travel by himself, looking for positions at mines or doing short-term projects such as consulting or surveying. Mary would stay either at her childhood home in Milford, NY, or stay other places with the growing family. Mary continued to do book illustrations and branched out into writing. As a successful businesswoman, Mary was able to support the family when Arthur was between jobs. Both Arthur and Mary traversed the country many times.

They had three children:

The children were all educated by tutors in their younger years, then went to boarding schools. This is the way Mary was raised. Education was highly valued in the Foote family. 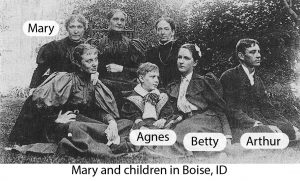 While Mary was in Milford in 1882, Arthur went to Idaho to open a mine. Betty was born in Milford during that time. Meanwhile, Arthur became intrigued with the possibility of irrigating the very-arid Boise area and transforming it into a thriving farming area. He stayed to survey and design a complete irrigation system for the region. He partnered with someone who was raising funds to build the irrigation system and he sent for Mary and the children. For the first time, the Foote family stayed in one place for about 12 years. Agnes was born in Boise in 1886.

The economy was in a slump and funding for the irrigation project fell through. Arthur (optimistically) continued with the project using his own money. Mary became more involved in the Boise community. Her reputation was growing as a writer and illustrator and her productivity was high during this period. She was selected as a Juror for drawings at the 1893 Chicago World’s Fair, which she attended.

When Arthur gave up on waiting for funding, he spent a couple of years working for the US Bureau of Reclamation leading field surveys in the Snake River area. He also did some traveling and other short-term jobs. Mary and the children remained in Boise.

Grass Valley and the North Star Mine

In 1894, Arthur received a telegram from James Hague, Arthur’s brother-in-law (married to Arthur’s sister). Arthur and James had worked together at a couple of mines and James was now owner of the North Star Mine. He needed someone to design and build a new power plant for the mine and he hired Arthur for the job. Arthur researched systems at other mines, then in 1895 he built a successful and innovative system. In 1896, Arthur sent for Mary and the family and they settled into a permanent home in Grass Valley with Arthur as Superintendent of the mine.

For the first ten years in Grass Valley, the Footes lived in a cottage on the property. Their son, Arthur B. (called Sonny) got his degree in Civil Engineering from Boston Tech (now MIT), worked briefly for his father at the North Star Mine, then went to Korea for a job at a mine. Betty attended the School of Design for Women in Philadelphia, PA. Agnes went to boarding school.

Arthur was very good at managing the mine — both the operations and the personnel. James managed the business/financial end of things. It was a good match of talents. Arthur’s continued work in the mining industry produced many innovations, both in new equipment and new processes. He was respected as an expert in the field.

Life had finally become settled and comfortable for the Foote family.

The North Star Mine was doing well and James wanted a large house where visiting dignitaries — including potential investors — could be entertained. Julia Morgan was hired to design and build the 10,000 sq ft North Star House. It became both the family home and the entertainment center for the mine. Since both Arthur and Mary had grown up as educated Easterners, they were very comfortable hosting visitors and events.

In 1904, shortly before the house was completed,17-year-old Agnes had appendicitis and died four days post-surgery. Mary never fully recovered from that. Fortunately, Arthur had a secure job because Mary’s productivity suffered.

In 1905, the Footes moved into the North Star House. Sonny was back from Korea and became Arthur’s assistant. In 1913, Arthur retired and Sonny became Superintendent (and later Manager) of the North Star Mine.

In 1906, daughter Betty married one of the mine engineers, Tod Swift. They lived initially in the North Star House but after their first child was born they moved to Hingham, MA because Tod wanted to live near the ocean again. 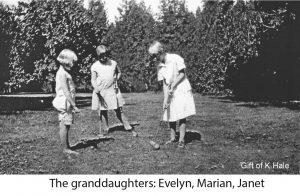 In 1913, Sonny married Jeannette Hooper, a former classmate of Betty’s and a member of a wealthy San Francisco family. Sonny and Jeannette lived the rest of their lives at the North Star House and raised three daughters:  Janet, Marian, and Evelyn.  It was a true family home with three generations there.

The children of Sonny and Jeannette grew up, got married, moved to their own homes and raised families. The mines were shut down in the 1950’s for economic reasons. Sonny was retired when he died in 1964, and when Jeannette died in 1968, their descendants sold the house to someone who used it for a boarding school. When the school failed, the house sat vacant for over 20 years. Vagrants and weather took their toll on the building.

The North Star Conservancy was formed in 2007 to restore the North Star House to its original design and elegance for the benefit of the community and as a tribute to architect Julia Morgan.