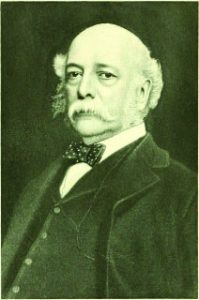 James Duncan Hague was born in Boston in 1836. He got an engineering degree at Harvard University, then pursued additional studies in mining and geology at the University of Gottingen, Hanover, Germany. He then continued studying at the Royal School of Mines in Freiberg, Saxony, Germany.

In 1863, James began his career, which took him to various mines. He was successful in his work, became wealthy, and was a leader in the mining world. He resided in San Francisco, California from 1871 to 1878, working as a self-employed consulting mining engineer. In 1872, he married Mary Ward Foote, sister of Arthur De Wint Foote.

In 1884, William Bourn, Jr., owner of the Empire Mine, purchased the North Star Mine, which had been slowly growing under a succession of owners. Bourn made improvements to equipment, acquired additional mine claims, and grew the productivity of the mine. In 1887, James Hague was looking for a mining investment. The fact that he was both an experienced mining engineer and a financier gave him an advantage in assessing investments. He also had strong backers lined up. After looking at several mines in the West, he selected the North Star Mine. Thus in 1867 William Bourn, Jr. sold the North Star Mine to James Hague. Bourn continued to work the Empire and Hague turned his attention to the North Star.

James studied the histories of smaller claims near the North Star and became convinced by these reports that consolidation of many claims was the only way to succeed. During the next few years he acquired the Massachusetts Hill, Rocky Bar, Boston Ravine, Gold Hill, and many other claims. All were idle, but had been productive between 1851 and 1884.

By 1894, James started pumping water out of the Massachusetts Hill mine and realized he would need a huge power plant. He needed the help of a man who had training in both civil and mining engineering. James and Arthur D. Foote were not just brothers-in-law; they had worked together at a couple of mines as they both traveled about the West. James knew that Arthur had the skills and background that he needed, so he hired Arthur. The new power plant and innovative pumping system were completed in 1895. In 1896, R.R. Roberts, the superintendent of the North Star Mine, retired. James appointed Arthur to that position, with enthusiastic support from the company Board of Directors.

James continued to make acquisitions and grow the North Star Mine. By the early 1900s, the mine was doing well and James wanted a large home that could serve as both the home for the superintendent’s family and an entertainment/hospitality center for the mine. He commissioned newly-licensed architect Julia Morgan to design the North Star House. It was completed in 1905 and the Footes moved in that fall.

James died in 1908 at his summer home in Stockbridge, MA. He was survived by his wife Mary and three children: daughters Marian and Eleanor, and son William (Billy). George B. Agnew replaced James as President of the North Star Mine Company, and James’ son, Billy Hague, became Managing Director.

James Hague used his engineering and business experience to expand the North Star Mine and make it one of the most productive gold mines in California. He left a legacy in the mining world and was an important driving force for the success of the mine.